skip to main | skip to sidebar

Marvel Us: All The Marvel Movies. Kind Of 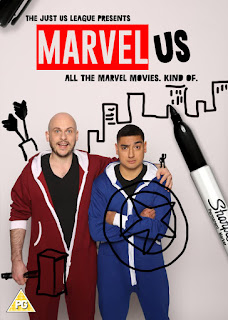 
'Every Marvel movie in an hour. Kind Of.' Well, if this doesn't sell, nothing will. Marvel seem to have conquered the movie world over the last decade, and with the recent release of the hugely successful 'Avengers: Infinity War' (which has smashed records all over the world, in no time at all), this is perfect timing.
This is theatre stripped to the bone; just two guys in onesies, on a tiny, empty stage (save for a hand-written A3 notepad, handily displaying each film's title in multi-coloured felt tip). A pretty mixed audience ranged from fifty-somethings to teen-agers, with a near equal mix of male and female, which is surely something every producer dreams of. Black Sabbath's classic 'Iron Man' created a suitably tense and dramatic atmosphere, as the lights dimmed, and we waited for our heroes to take the stage. To lighten things up a little, we also had the contrast of Guardians of The Galaxy's breezy, feelgood number, 'Hooked On A Feeling' to get us in the right mood. The 'Just Us League' are composed of New Zealander Javier Javier, and Bristolian Gary Tro; two stand-up comedians (and self-confessed nerds). They make a great team, and like all good double acts, present very different stage personas – Javier is dressed in blue, and is the shorter, more sardonic one. Gary, in red, is the tall, bald, and slighty goofier one. A good natured preamble had the guys bondng with their audience as fellow nerds, and explaining just how they'd decided which Marvel movies to cover, and which to ignore. Taking on the guise of a P.E. teacher, Javier divided the movies into teams A and B. Unsurprisingly (at least to us afficiandos), Team A comprised of Iron Man, Captain America, Thor:Ragnarok, etc. Whilst Team B had Elektra, Blade, and Thor: The Dark World. Special mention was given to the execrable Fantastic Four movies, who Javier neglected to include in either team.
Only 2 people in the audience hadn't seen 'Avengers: Infinity War', which resulted in a short, spoiler-free, sketch “to get it out of the way”, depicting a frustrated Hawkeye sitting at home and desperately trying to imagine his team-mates managing to save the universe without him. Then, on to the show proper, with 2008's Iron Man. I had expected a potted version of each movie, but instead we were presented with self-contained, often seemingly improvised on the spot, sketches that attempted to sum up each film's plot. This threw up some surprising choices (at least to me), focussing on many characters' often unexplored motives and emotions. Iron Man had Tony Stark's best buddy Jim Rhodes/War Machine obsessing over why his calls were not being returned, and WW2's Captain America's Steve Rogers awakening in modern day New York, with all the non PC attitudes that character would likely retain. Each sketch was played with energy and obvious enthusiasm, with many audience members reacting with undisguised delight at many subtle (and some not-so-subtle) comics in-jokes. Javier and Gary seemed to be enjoying themselves immensely, bringing their heroes and villains to life, and high-fiving one front row punter who was the only one to get an obscure joke about Thor!
The God of Thunder sketch was absolutely inspired, with Asgard's favourite son played as a cocky, rich boy describing his 'gap year' on Earth (whilst slying commenting on the movie's shaky plotting). Gary's impression of Chris Hemsworth's cod Shakespearean delivery was hilarious. The popular Hulk/Loki scene in 2012's Avengers had an angry, bellowing Gary throwing around a spare blue onesie, followed by the guys arguing over the cost of this extra costume/prop only being used for one sketch. There followed a comically tearful description of the life of poverty-stricken actors on tour, having to manage with a near zero budget, and the fact that they couldn't even afford to stay over in Sale that night (and were, instead, a taxi drive away in a downbeat area of nearby Altrincham).
The flow of Marvel movies was interrupted by Gary revealing that he never really wanted to do this show, and would much rather be performing a version of Disney's Beauty and The Beast, while Javier looked on, aghast at his friend's love of such obviously unworthy material. The payoff to this sketch came right at the end of the show, when an offstage Gary, on microphone, did a simply beautiful impression of Marvel head honcho Stan Lee, enlightening Javier to the fact that Disney now owned Marvel, and he was lucky they weren't “sueing the ass off you guys!”

This was full-bloodied, breathless, and infectious stuff. Two guys, and their audience, having a simply 'Marvel Us' time!

Posted by Brian Edward Gorman at 4:29 AM